Robotics, An Evening With Penn Professor Daniel Lee in Phoenix! (Children Are Invited!)

Join us as Penn Professor Daniel Lee speaks about Intelligent Robots at Penn! Professor Lee is renowned for his research in designing intelligent machines, using his electrical engineering expertise and interest in physics and neuroscience. 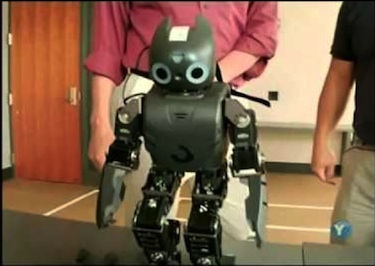 From robot driven cars to a robotic soccer team, to speaking on the Fear of Robots on the Colbert Report and leading edge robotics research at Penn.

Join us as Penn Professor Daniel Lee updates us on Intelligent Robots at Penn and the latest research in artificial learning.

We are planning an exciting evening including a lecture, Q&A, appetizers and networking with Penn Alumni.  Children are invited to attend with their parents; Professor Lee's presentation will excite minds of all ages.

He received his B.A. in Physics from Harvard University in 1990, and his Ph.D. in Condensed Matter Physics from the Massachusetts Institute of Technology in 1995.

Before coming to Penn, he was a researcher at Bell Laboratories, Lucent Technologies, in the Theoretical Physics and Biological Computation departments.

He has received the NSF Career award and the University Lindback award for distinguished teaching; he was a fellow of the Hebrew University Institute of Advanced Studies in Jerusalem, an affiliate of the Korea Advanced Institute of Science and Technology, and has helped organize the US-Japan National Academy of Engineering Frontiers of Engineering symposium.

At the GRASP Lab and as director of the University Transportation Center at Penn, his group focuses on understanding general computational principles in biological systems, and on applying that knowledge to build autonomous systems.

Professor Lee's research focuses on applying knowledge about biological information processing systems to building better artificial sensorimotor systems that can adapt and learn from experience. Drawing from the ways in which biological systems compute and learn, Dan and his lab look at computational neuroscience models, theoretical foundations of machine learning algorithms, as well as constructing real-time intelligent robotic systems, with an ultimate goal of making machines that better understand what we want them to do.

Professor Daniel Lee is also Penn's director of the University Transportation Centers (UTC) a partnership between Penn Engineering and Carnegie Mellon University's College of Engineering located on CMU's campus. The UTC mission is to conduct research and implement technologies related to improving the safey and efficiency of transportation. It is not only about making vehicles smarter but also making their users smarter as well and positions Pennsylvania as a test bed for improving transportation.